Ramón Estruch: "It is of essence to spread the word on rational and moderate consumption of wine in Spain, because 20% of the protective effects of the Mediterranean Diet are actually based on wine"

The coordinator of PREDIMED, one of the important studies made on the benefits of the Mediterranean Diet, closed FENAVIN 2019's Program of Activities with the Round Table 'Nutrition and Wine' in the company of the experts Luis Beato, Fernando Colado and Ildefonso Caro 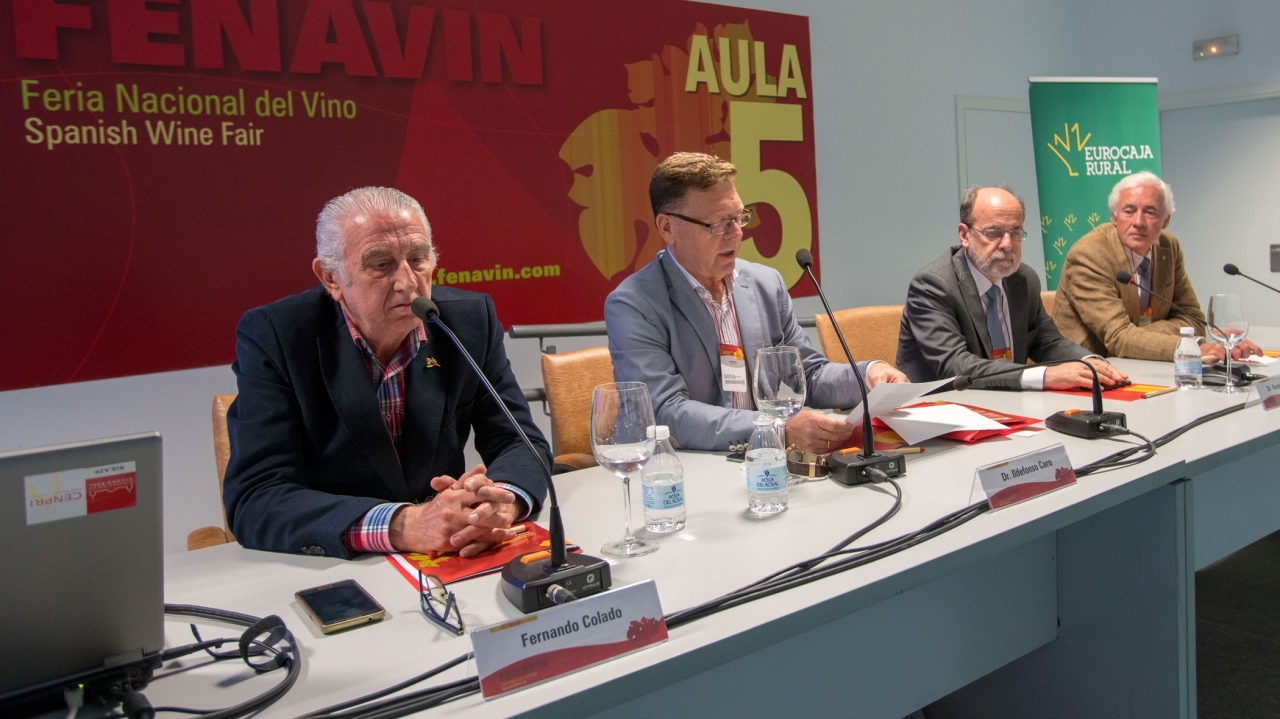 According to the European Normative, wine is considered a food product and not an alcoholic drink. Thus, based on this premise, FENAVIN 2019 has closed its Program of Activities “Wine, Health and Society”, which is sponsored by Eurocaja Rural, with the Round Table “Nutrition and Wine”, with the participation of prestigious experts, amongst which was Dr. Ramón Estruch, nutritionist at the Hospital Clínic of Barcelona, who wagers on “spreading the word on rational and moderate consumption of wine in Spain, because 20% of the protective effects of the Mediterranean Diet are actually based on wine”.

Ildefonso Caro, specialist in Family and Community Medicine for the SESCAM, was in charge of coordinating this round table, goal of which consisted in “giving value to the positive action of wine on the human organism, making it quite clear that wine is not only not detrimental, but quite the contrary, as when enjoyed in correct amounts it can be considered a food product rather than an alcoholic drink, the same according to that indicated in the European Normative”.

Today Ramón Estruch (Barcelona, 1956), one of the great champions of the Mediterranean Diet as the foundation for health, visited FENAVIN 2019 for the first time, the same to highlight the significance of wine as one of the values of this type of diet. Estruch, doctor and researcher at the Hospital Clínic of Barcelona is the National Coordinator of the PREDIMED Study, which during years researched the benefits of the traditional Mediterranean Diet. In the opinion of this specialist, wine consumed in moderation is an added value to the protection of health.

Dr. Estruch underscored how “wine has many components that are anticarcinogenic and that in most studies made on wine, wine has a protective component, in particular when consumed in conjunction with the Mediterranean Diet, and it is ideal for most in the prevention of chronic disease, including cancer”, emphasizing that “wine, along with olive oil and bread (and farinaceous products) is one of the pillars of the Mediterranean Diet. In some studies the role of wine in the diet has been analyzed, and it has been calculated that 20% of the protective effects of the Mediterranean Diet can be attributed to wine, as long as it is consumed in moderation and with meals”.

This expert, at his first time in FENAVIN, indicated that he was impressed by the sheer size of the trade fair and he congratulated the organizers for having set it up, to then continue by recommending in Ciudad Real “two drink units, that is two glasses of wine for men and one glass of wine for women every day and always with healthy meals based on the Mediterranean Diet”, while in turn emphasizing that “spreading the word on rational and moderate consumption of wine is basic, as  I have just returned from the US and it is really a pity to see how consumption of wine is being reduced in Spain in contrast with the US, where wine consumption is on the increase, and this is not logical because wine belongs to our land and it represents the essence of the Mediterranean Diet”, Estruch added.

He also insisted on the benefits obtained from moderate consumption of wine, “which has more than proven a multitude of effects at many levels. In the first place there are many studies that back-up the idea that moderate consumption of wine reduces mortality due to any cause in about 20-25%. It also reduces the incidence of cardiovascular events (myocardial infarction (heart attacks), strokes and cardiac arrest), incidence of diabetes mellitus, arterial pressure figures, improvement of the lipid profile and cognitive function and it increases fibrinolysis (mechanism that prevents blood clots), amongst other effects. Most of these effects can be attributed to the antioxidant and anti-inflammatory properties of wine.

The Agriculturer and Doctor Fernando Colado, specialized doctor of Rheumatology in Ciudad Real and President of an Oil Mill in Torralba de Calatrava, offered up a historical review on nutrition and wine since the time of the Greeks, Hippocrates, finishing off with the Spanish Renaissance, highlighting several Toledo born figures that made a point on this matter during the 16th Century, amongst which were Fernando de Mena, Juan de Valcárcel and Pedro de Ojea.

In Colado’s opinion, “wine is good for rheumatism, the heart, the arteries, good and bad cholesterol, it has true antioxidant polyphenols, which fight against aging, representing one of the most potent benefits that actually exist in like manner to Virgin Olive Oil”.

The expert in eating disorders, Dr. Luis Beato, Psychiatrist at the University General Hospital of Ciudad Real, was the first to talk, “on what is and what isn’t an addiction to game, to the internet, to food, to low weight, to sports, to work, etc., mentioning that sometimes the problem is not in itself in the product or its toxicity, but in fact in how we are using it; because, otherwise, we think that by merely eliminating the substance or the toxic product we resolve the problem, when this is not the case at all”. Once the theme was underway, he explained in what measure moderate consumption of wine can help us in this case, as is likewise seen with other products.