Julià: "In that pertaining to wine, we have managed to create one of the most important trade fairs"

The Director of the National Trade Fair on Wine (Fenavin), which is set to kick off on May 7th, talks to us about the projection that this event has experienced at an international level, having turned into a benchmark for the industry. 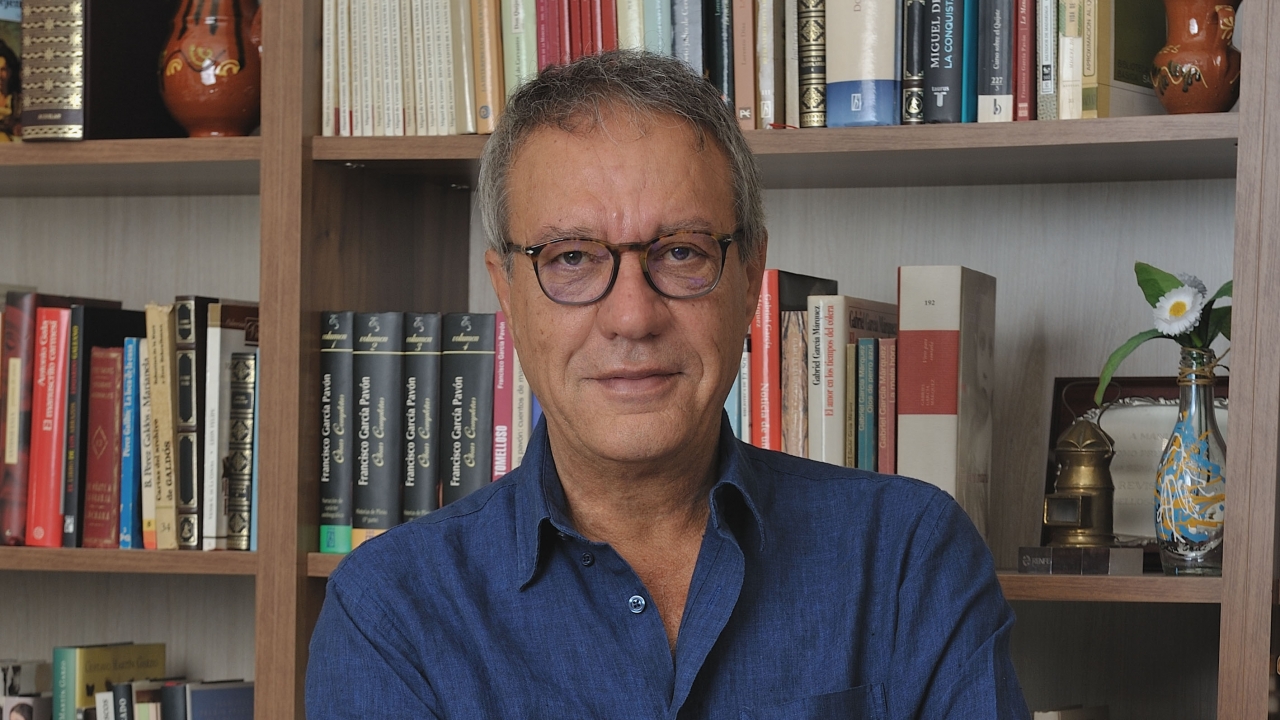 Since its very first edition Manuel Julià Dorado (Puertollano, 1954), has always represented the essence of the National Trade Fair on Wine (Fenavin). Without Manuel and without his team the success that this trade fair has enjoyed would be absolutely unthinkable. It has indeed been thanks to his tremendous capacity for organization and work that each edition has by far surpassed the previous one in that referring to commercial contacts, participants and international buyers. During this interview Fenavin’s Director tells all there is to know about the 2019 edition, which is set to start and be held between the dates of May 7th to the 9th in Ciudad Real. Juliá, who has managed to consolidate the trade fair and actually turn it into a referent, just recently announced that he will be leaving his position as Director. As of now he wants to dedicate his time to reading and writing. In short, as of now he wants to dedicate his time to literature and journalism.

What is it that you would like to highlight about this 2019 edition of Fenavin?

Well, the truth of the matter is that this trade fair doesn’t actually have a dazzling novelty every year. However, what we do maintain is a highly positive evolution in each one of the editions. In this tenth edition we continue to grow in the number of exhibitors, space and commercial contacts. We are talking about a trade fair that now has ten pavilions (two more than in 2018). That is 33,430 square meters (approximately 4000 more square meters than last year) and about 2000 exhibitors (between wineries and cooperatives) that will be coming in from each and every region of Spain, with almost 50% of the wines represented coming from Castilla-La Mancha. We must remember that in the year 2001 we started with about 600 or 700 wineries and about 8000 square meters of exhibition grounds.

Alright then, so are there any novelties at Fenavin this year?

Not really, this year there are no novelties. The idea isn’t to actually discover something new every year. This is a very professional trade fair. It has very sound and highly established foundations. More than 18,100 buyers will be coming in, with about 4200 of them coming from abroad, from more than 100 countries. This year in Ciudad Real there will be representatives from countries such as the Republic of Côte d’Ivoire, Senegal, Cameroon, Togo, Ethiopia, Djibouti, Eritrea, Tunisia, apart from the really big ones such as: Japan, United States Germany, Sweden and France. I would like to insist on the fact that Fenavin is a very professional trade fair that generates business.

Ciudad Real seems to be really tied into the holding of this trade fair. Do you think it is about time to change cities?

Never. Fenavin saw the light in Ciudad Real and it has represented the idea of a municipal corporation and that of the technical professionals, amongst which I consider myself to be one of them. It was born already tied into Ciudad Real. There is no reason whatsoever to even consider leaving this city behind. Apart from this I am actually quite surprised by the question and the fact that anybody could possibly think about holding the trade fair anywhere else. We have managed to create one of the most important trade fairs in the world in that pertaining to the wine market. And the Ciudad Real society has also worked hard in the holding of the trade fair, the winery owners of the province, the professionals and the journalists. Absolutely everybody has wagered on this reality. Fenavin is now the only wine trade fair to be held in Spain and it has indeed attracted attention from around the whole world.

Does the city of Ciudad Real actually have the necessary infrastructures to receive all these visitors?

Indeed, more than enough. Ciudad Real is only at a distance of fifty minutes by train from Madrid. That in itself, the proximity of Spain’s capital city, is an added value. Keep in mind that I have seen many trade fairs. I once went to the Prowein trade fair, which takes place in Dusseldorf (Germany) and I had to sleep on a boat that was 70 kilometers from the fair grounds. During the days of the trade fair there are circular route buses that communicate the trade fair grounds with the city center and with any other point of the Ciudad Real capital.

What repercussion does the trade fair have on the province of Ciudad Real and the region of Castilla-La Mancha?

Fenavin does not only have repercussion on the province of Ciudad Real and the region of Castilla-La Mancha, but in fact it has a follow-through effect in all of Spain. We must not forget that this is a trade fair to which each and every autonomous region of Spain comes in and thus repercussion is absolutely fantastic. We have promoted exports, as there are thousands of international buyers coming in from countries in which the wine industry would have it quite hard to actually penetrate. This situation has also given rise to a very important improvement in the quality of the production, resulting in a vast technological and training improvement. Although we must not forget that there is still a historical shortfall in our region, and that deficit is precisely commercialization. In this sense the trade fair has really helped to sell wine from this autonomous community and from other regions of Spain. And the winery owners that come to the trade fair are very much aware that they will have buyers right at home. Thus they see themselves obliged to compete with the very best. In this sense Fenavin’s role has been fundamental for the consolidation of this industry.

Do you consider that the image one had of the wine of Castilla-La Mancha has changed and, in general the image of Spanish wine as a whole?

Yes. Fenavin has favored the improvement of the image one had of Spanish wines and of Castilla-La Mancha wines. The trade fair has become a true showcase of national wines. We have improved the export figures and we have the data that backs this up. For example, Ciudad Real used to export about Euros 80 million and currently it is exporting a value of about Euros 450 million. That is absolutely undeniable. There has been growth in foreign sales that, without Fenavin, would have been completely impossible. Since its very beginnings we have managed to draw-in buyers from around the world who now come to this city to buy wine.

Exports have evolved very positively during these years. So now, what about domestic consumption, is this still in deficit?

Domestic consumption is unfortunately a negative reality from two perspectives. One, in the wine sales themselves, because less wine is being sold than before. And in the second place due to the low consumption of wine amongst Spanish people. We don’t even believe what we have. We are a wine growing country and we find ourselves amongst the top three world producers. So what we have to do now is what the Germans have done, that is in the way they defend their beer, or the Scottish defend their whiskey. We must protect our wine, because this industry generates more than Euros 2,500 million in business. We must sell our production and, this is the reason why we must reach all the markets with a powerful image, with improved marketing channels and with a good value for money ratio. And without forgetting to promote a cultural relationship with wine.

This great trade fair continues along the path that it undertook in its very first edition. Thus we continue to offer a program that includes more than 100 proposals, highlighting sessions and training conferences such as for example, how to improve exporting in different countries, how to undertake the latest trends in marketing or new technologies and how to optimize wine sales.

You weren’t actually an advocate of the wine summits. Do you think they can once again be organized?

I don’t really think comparing Fenavin with the wine summit is very suitable due to a very clear cut reason. Fenavin is an event that is precisely geared towards business, with the participation of 2000 wineries and buyers from more than 100 countries. The feeling I had was that the wine summit was basically an event based on image and exhibition. These two things cannot be compared. I both wager and believe that it is very convenient to fight for things that have a sound basis and not only on the image itself. These things must have both an economical and a commercial point, and they should help to improve the gross domestic product (GDP) because if something is only based on image, than it doesn’t really benefit the citizens. I actually think that the summit was an expensive extravagance and a waste of money.

You have mentioned in a few interviews that this would be your last year heading Fenavin?

Yes, exactly. I am a writer, poet and journalist. I have been working on this for twenty years now and I think that when someone has been doing something for many years, one should actually step aside and let others who are younger and stronger continue with the work. The trade fair now finds itself in an unbeatable position before the world. I think that the time has now come to dedicate myself to reading, writing and to what is actually my basic profession: which is none other than literature and journalism.

Finally, how do you see the future of wine in Castilla-La Mancha?

I think it is doing really well. It is undergoing a very positive evolution. However, we must ask ourselves the following: Where do we come from, what are we and where are we going? If we look back at where we come from we can see that we come from a deficient production, with a historical negative image and negative commercialization, basically one that was on hold. That was the reality we used to have. Now we have transformed into a powerful industry, although we are still dragging along some of our shortfalls from the past, and this is something still to be resolved. We must overcome these shortcomings that used to mean that wine was not the basic product of our economy and which has proven to actually be one of the main pillars of both our regional and national growth.