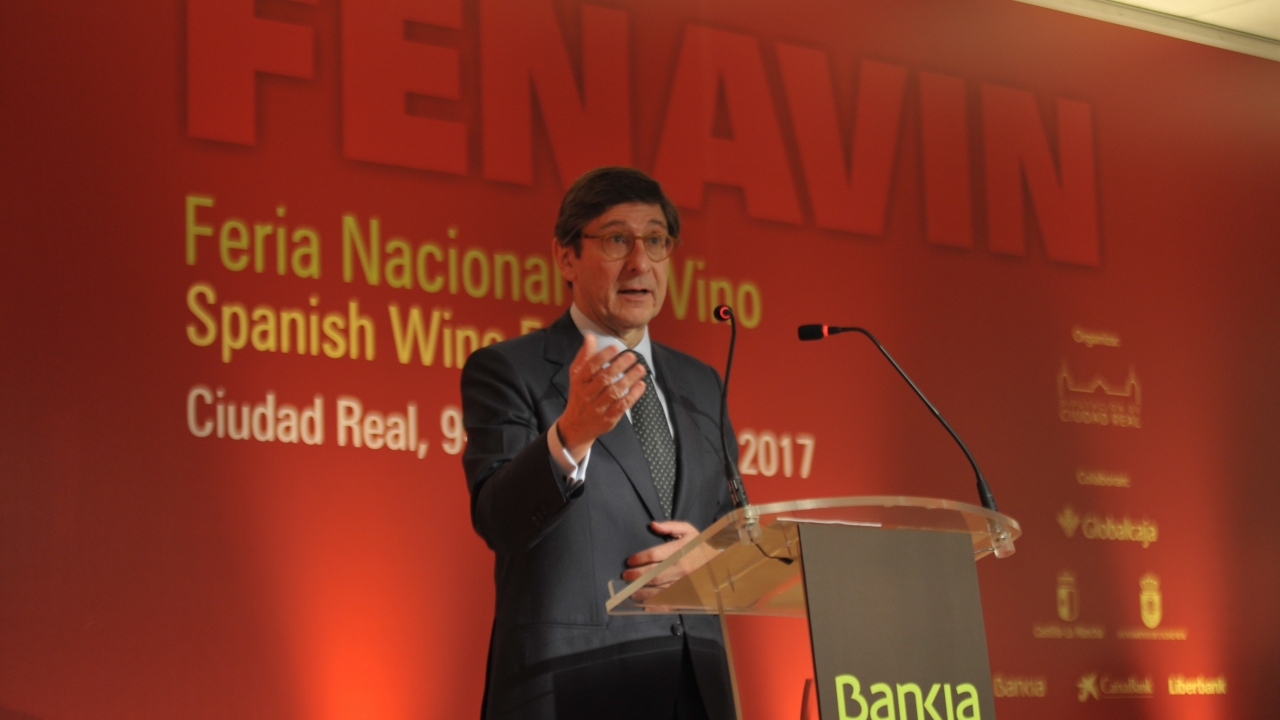 This morning the Director General of Bankia, José Ignacio Goirigolzarri, has imparted a conference at FENAVIN 2017 in which he analyzed the challenges and the current situation of the wine industry in Spain, having classified the same as a key sector, as it reaches 9% of the Spanish GDP, piece of information from which the entity’s commitment arises and his own personal commitment with the industry.

Goirigolzarri, who divided up his seminar into three parts, admitted that he is highly impressed with the dimensions of FENAVIN ever since the first time he visited it in its previous edition. The first has covered a brief overview of the Spanish economy, highlighting the current situation of important growth free of the two factors that gave rise to the imbalance in other periods of bonanza. “On the one part there is no foreign debt, but also now families and companies are not in overindebtedness”, he explained. In the opinion of Goirigolzarri, the challenge resides in maintaining this growth in order to create a million jobs.

With regards to the agri-food industry, the Director General of Bankia has praised its strength, with 2,400,000 jobs and taking up 17% of exports, and with wine as the star product. The Director General has indicated that competitiveness and internalization are the industry’s challenges, in which Castilla-La Mancha currently assumes 50% of exports.

“Spain is the country that exports the most hectoliters of wine, reaching 24 million, well above Italy or France, and yet Spanish wine is sold for a bit more than one euro a liter while French wine reaches up to five euros a liter, hence we must add value to Spanish wine with a foreign network and far more powerful market techniques”, Goirigolzarri sustained.

The Banker stated that in the last fifteen years exports of wine have doubled and participation of companies has tripled. However, he detailed this information, indicating that only five companies are capitalizing 22% of the total imports.

Goirigolzarri, who is now reaching the five year mark as Director General of Bankia, has also analyzed the current situation of the banking industry. The Banker has wanted to underscore that currently the entity counts with a strict code of values and a professionalized governing board and it has complied with the market goals for the bank sector for the European Union two years beforehand, with Bankia being the only entity to have achieved this feat. In the opinion of the Director General, the firm has two important challenges facing it, one to adapt to the growing digitization and two to maintain the transformation of the state of mind of Bankia’s team that he started five years ago today.

Goirigolzarri was introduced by FENAVIN’s Director, Manuel Juliá, who expressed his appreciation for not only Bankia’s financial support, but also for its willingness to offer the network of branches abroad to the participating wineries. Juliá covered the figures of the trade fair, indicating that in this edition it has reached figures of 1,800 exhibitors, 17,000 buyers from 90 countries and an expected 300,000 commercial contacts.