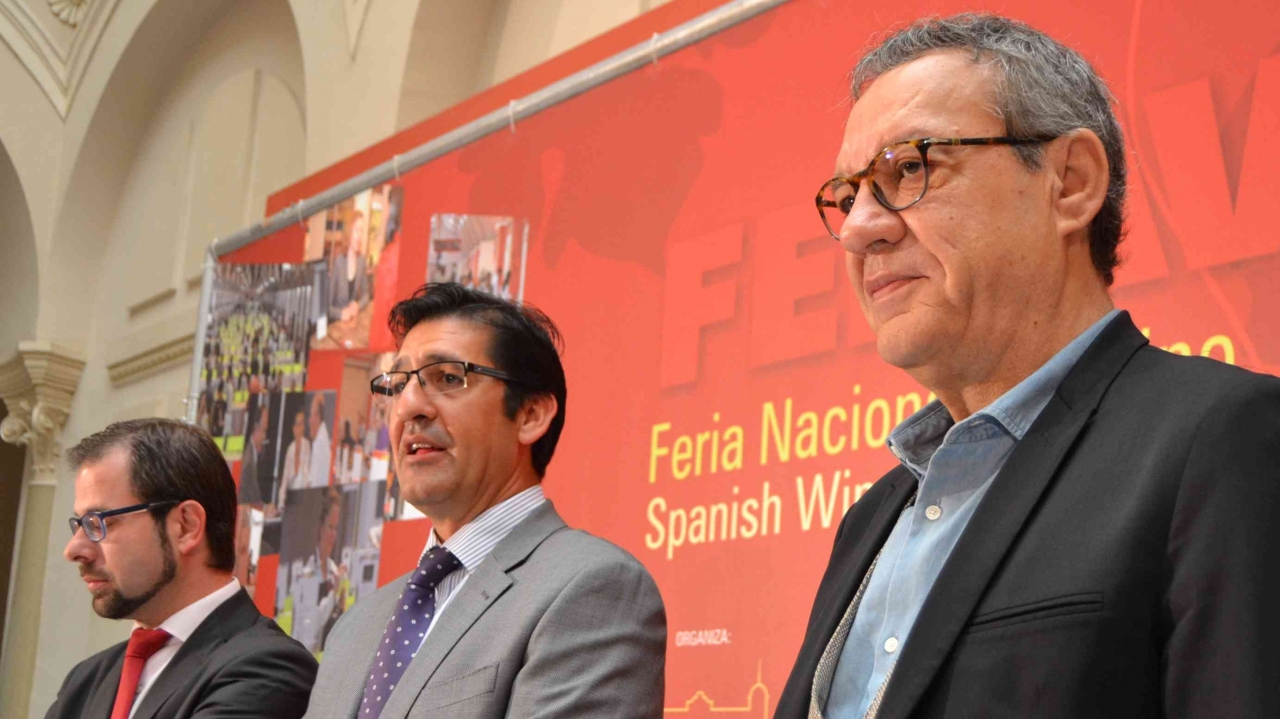 The ninth edition of the National Trade Fair on Wine will take place from May 9th to the 11th at the Ciudad Real Trade Fair Pavilion with a determined and well seated spirit of promoting business, and boosting the sector as its own economic asset, strengthening the culture of wine and increasing domestic consumption. The trade fair surpasses itself and once again makes history, because even before it is set to start an increase in exhibitors and buyers has already been recorded with regards to previous editions. This is what José Manuel Caballero, President of the Provincial Government and of the Trade Fair has underlined this morning during the official presentation of FENAVIN. The President was also in the company of the Director and Institutional Coordinator of the event, Manuel Juliá and Gonzalo Redondo, respectively.

Caballero mentioned that in the world’s main vineyard, reason being that 14 percent of the world’s wine growing is concentrated in Castilla-La Mancha and the greatest number of acres are precisely to be found in Ciudad Real, “we are more than aware of the importance that the wine sector has for our land, given that it actually deals with our history, our culture and our life. Thus the reason why it is perfectly understandable that FENAVIN actually saw the light, grew and developed in Ciudad Real itself. In 2017 the trade fair is set to reinvent itself by growing even more, this time covering 31,271 square meters in eight pavilions, that is an additional pavilion called Noé, and its monographic essence also returns, because it is exclusively dedicated to wine, breaking all records, as 1,802 wineries, of which 411 are from Ciudad Real will be coming together with 70 Designations of Origin and 17,000 buyers from 84 countries, representing 14 more than in the 2015 edition”.

On the other hand, Caballero also commented that since 2001 the wines of the province and of the region have reached a very high level of internationalization. Proof of this is that exports used to make up 99 million euros, while currently the figure stands at 317 million euros, which represents an increase of 320 percent.

The President also explained that FENAVIN is a highly profitable exhibition because it contributes with 5.55 per each euro of public investment. And he also affirmed that the economic return reaches 40 million euros of a 2.5 million euro budget, including FENAVIN Contact, which took place in June of 2016. “No policies have existed generating a favor this size to the wine sector”, added the President of the provincial institution, to then continue by recalling that “we come here to sell and to buy, which is precisely what gives the trade fair its value”.

In this sense he indicated that seven of the ten most important wine making groups of the country, such as García Carrión, Félix Solís, Freixenet and Grandes Pagos de España, among others, will all be coming together in Ciudad Real. However, smaller wineries with limited production and cooperatives where the members are also wine growers will also be present. Hence the equalizing condition that has arisen at FENAVIN, in which all exhibitors have access to business under equal terms at the Wine Gallery, which in turn represents the biggest tasting hall with more quality references in the world, thus allowing all trends to be made known. In this sense Caballero has also put forward the boom that sparkling and organic wines are now experiencing.

Likewise, Caballero has explained that all the exhibitors will also be able to equally use the Business Searcher and the Business Center, two tools that impart that quality of a modern trade fair on FENAVIN, which uses new technologies to sell wine and that allows for more than 300,000 commercial contacts to be made, that is about 17 contacts per exhibitor during three days.

On to other matters, the President of the Trade Fair has mentioned that the main goal is to sell wine, although he has also underlined that for the first time they have worked on promoting the culture of wine by taking the trade fair to the people of the province. The idea is to encourage moderate consumption of wine among the different collective groups, such as women. They also expect to provide the world of wine with even more prestige, this by adding new concepts, relationships and synergies.

This is the reason why 86 activities have been planned, in which 170 speakers from the national and international scene will be participating. These are the  best of the moment ; in that pertaining to specialization in the world of wine. In the words of Caballero, all this has been possible thanks to the fine work carried out by FENAVIN’s organization, along with the work of its Director, Manuel Juliá, who has been heading it all, and with Gonzalo Redondo the Vice President who has been in charge of the institutional coordination. He also expressed his appreciation for the support received from the two political groups that are represented in the provincial corporation, in particular the opposition, reason why he mentioned two of the persons that have been in charge of being the spokespersons in the present mandate, Antonio Lucas-Torres and Adrián Ferández. As indicated by Caballero, to date they have supported the Government Team in all that related with the trade fair.

Alike,  he also highlighted the support received from the Board of Communities of Castilla-La Mancha, represented this morning by the delegate in Ciudad Real, Carmen Teresa Olmedo. “What is truly important is not economic support, but institutional support, support that does not trip us up but actually promotes and supports the trade fair”, Caballero assured, then recalling that the President of Castilla-La Mancha, Emiliano García Page, even prior to his taking up his post, already announced his unconditional support for the trade fair. Subsequently, in answer to the questions from the journalists, Caballero has acknowledged that he would have liked a greater involment of the ministries of Agriculture and Economy.

FENAVIN in figures and information

FENAVIN’s organization has been working hard on bringing in the greatest number of national and international buyers in its history so that they will be present at Ciudad Real, reaching the figure of 17,000, which will allow for an increase in the number of exhibitors, yet maintaining the precise relationship between the offer and the demand so that both groups can maximize their business and work possibilities during the three days of the trade fair.

These good expectations are based on objective data derived from the figures. FENAVIN 2017 will be bringing together 1,802 wineries, which represents a growth of 32.47% with regards to the previous edition. A total of 918 of the wine growing companies will be coming in from Castilla-La Mancha, 411 of which are from the province of Ciudad Real, which will count with representation of 90% of the wineries and cooperatives to be found in the province at the trade fair. In order to cover this growth the Trade Fair has included an additional pavilion, which is called Noé, thus increasing the practicable space in 14%.

Paradoxically, the increase in exhibition space at the trade fair walks hand-in-hand with the number of wineries that are on a waiting list. In 2017 this figure reached 402, which represents an increase of almost 30%.

However, to only think about FENAVIN in terms of business means making an orphan out of the spirit of the trade fair. In its ninth edition, the trade fair is wagering on moderate consumption of wine by way of culture, as this product forms part of the Spanish social inheritance since thousands of years ago. Once again the idea is to give consumption of wine the prestige it deserves, rekindling its connections with cultural, healthy, aesthetic and sports values.

It is with this finality in mind that a broad-ranging program of activities has been created, which apart from training sessions and lectures on how to improve exporting to other countries or the latest trends in marketing and new technologies to optimize sales, includes a series of different spaces in which important personalities from the world of literature, communication, fashion or health will be transmitting their passion for what the world of wine and culture entails.

Thus we will be expecting fabulous communicators that will accompany us, such as Lorenzo Díaz, Raúl del Pozo, Andrés Sánchez Magro, José Ribagorda, Antonio Lucas, Manuel Jabois, Pedro Simón and Olga Viza, who will once again head the acknowledgement ceremony pertaining to Ambassadors of Wine. Gastronomy will also hold a central role, with the presence of  Joxe Mari Aizega, Director of the Basque Culinary Center, and Josep Roca, Sommelier at Can Roca, who will be presenting the book “Tras las viñas” (Behind the Vines), which he has published along with the psychologist Inma Puig.

As usual some of the most highly appreciated names in the world of wine at an international level will also be sharing their experiences. This is the case of Robert Joseph, Yumi Tanabe from Japan, Sara Jane Evans or Rafael del Rey from Spain.

And of course, we could not do without first level names from the world of national wine. Ramón Tamames will be directing an encounter in which the important wineries of the country will be analyzing the impact of wine on the “Marca España” (Spain Brand). Present at this round table will be names such as  José Luis Bonet, President of Freixenet and of the Chamber of Commerce of Spain; Miguel Torres, Owner of the Torres group; Tomás Osborne, President of the group that holds the same name; the Mancha born Félix Solís; Alejandro Aznar, President of Herederos de Marqués de Riscal and the High Commissioner for the “Marca España” (Spain Brand), Carlos Espinosa.

With these and other participations and activities, FENAVIN wants to encourage the population to recuperate the presence of wine at the table as an essential accompaniment to health and enjoyment, although always from the perspective of moderate consumption.